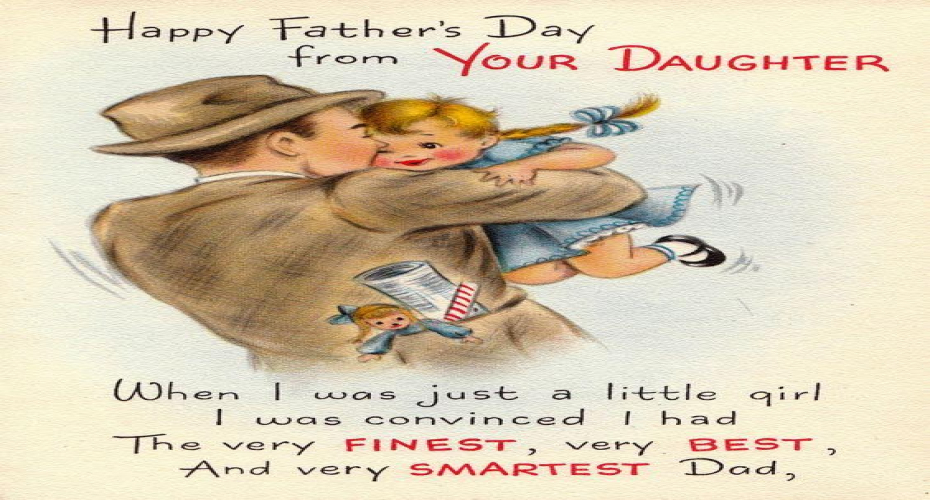 Depictions of dads as aloof, pipe-smoking, newspaper-reading, besuited men ‘enthroned’ by the fireplace have disappeared from all cards, with the exception of parody cards, and have been replaced by casually-dressed, soft-in-the-middle, sofa-dwelling figures, often likened to Darth Vader and far more likely to be comically inept, according to new research.
Archive analysis of Father’s Day cards by Clintons , shows the extent to which dads’ roles have shifted in the modern home.

The gift and card retailer looked at thousands of depictions of dads on Father’s Day cards since the 1950s.

A typical poem from the inside of a card 50 years ago would read:

“You can sit in your shirt sleeves

Today if you choose

Get by without shaving

And leave off your shoes;

Get first whack at the paper

And have your own way:

Eat, drink, and be merry

Today, a typical greeting would read:

Thanks to you, I learned at an early age how to Save My Money...

...I used YOURS instead!

Have a Great Father's Day

In 50 years, dads have put on around 15 kilos, and are far less likely to be depicted behind the wheel of speed boats or sports cars or scoring the winning goal. They are, though, more likely to have a strong emotional connection with their children.

According to Clintons’ analysis, there have been five phases of Father’s Day cards in the last 50 years:​

Tim Fairs, a director at Clintons, said: “Dads have always been treated affectionately in cards, but in the last decade we’ve seen reverence replaced with anything goes humour. Some traditionalists might bristle at this, but the reality is that the humour shows how accessible and important dads are to their kids and that’s a cause for celebration.”

A brief history of Father’s Day:

Father’s Day originated in the Middle Ages. It was then observed on19 March, as the feast day of Saint Joseph, who is referred to as the fatherly Nutritor Domini ("Nourisher of the Lord") in Catholicism and "the putative father of Jesus" in southern European tradition.

The modern version of Father’s Day emerged in the US in the early 1900s. Harry C. Meek, a member of Lions Clubs International, claimed to have first come up with the modern idea for Father's Day in 1915. Meek rather immodestly chose the thirdSundayin June because it was his birthday.

On June 19, 1910, a Father's Day celebration was held at the YMCA in Spokane, Washington by Sonora Smart Dodd. Her father, the civil war veteran William Jackson Smart, was a single parent who raised his six children there. Although she initially suggested June 5, her father's birthday, the pastors at her church did not have enough time to prepare their sermons, and the celebration was deferred to the thirdSundayin June. Several local clergy accepted the idea, and on June 19, 1910, the first Father's Day sermons honouring fathers were given.

In the 1930s, Dodd started promoting the celebration again, raising awareness at a national level. She had the not altogether altruistic help of those trade groups that would benefit most from the holiday, including tie and tobacco pipe manufacturers. By 1938, she had the help of the Father's Day Council, founded by the New York Associated Men's Wear Retailers.

In 1966, US President Lyndon B. Johnson issued the first presidential proclamation honouring fathers, designating the thirdSundayin June as Father's Day. Six years later, the day was finally made a permanent national holiday in the US when President Richard Nixon signed it into law in 1972.